Posted at 16:58h in News + Reviews by theatreaspen 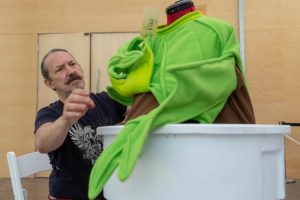 Squatting within the confines of a furry 6.5-foot green puppet, Travis Anderson tries to keep cool with ice packs on his shoulders as he maneuvers the more than 100-pound man-eating plant.

If it sounds ridiculous, it’s because it is part of the cult-classic, sci-fi musical “Little Shop of Horrors,” opening tonight at Theatre Aspen.

Directing the show is Mark Martino, who also directed the same production in 2008. Martino, a two-time 2018 Henry Award nominee and Carbonell Award winner, is revisiting “Little Shop of Horrors” in his 11th season at Theatre Aspen.

Originally a comedic film by Roger Corman circa 1960, “Little Shop of Horrors” was later adapted into a horror comedy rock musical with lyrics by Howard Ashman and music by Alan Menken.

“Little Shop of Horrors has been an audience favorite for decades, and for good reason,” Theatre Aspen associate artistic director Matthew Troillett said. “The idea is fun — let’s just start with the man-eating plant — the music is catchy, and the story is full of heart.”

Troillett called Martino a “fearless director” to Theatre Aspen’s talented creative team and cast of nine, led by Jordan Grubb as Seymour and Julie Kavanagh as Audrey. The musical follows the story of a nerdy floral assistant, Seymour, who discovers that a plant from outer space, Audrey II, feeds on human flesh and blood to survive.

Playing one part of the role of Audrey II is Anderson, a 20-year-old college student, actor, dancer and product of Theatre Aspen’s Apprentice Program. The production marks Anderson’s debut into puppetry, and between Theatre Aspen’s “Guys and Dolls” production and “Little Shop” rehearsals, he had about two weeks to learn, and master, the art.

Fortunately, Anderson said, there are a number of parallels between puppetry and dance.

“There’s a lot of choreography and counting involved and a level of precision that’s really necessary to make it look like it all works,” Anderson said during a break from tech rehearsal Wednesday.

One of the biggest challenges, Anderson said, is trying to time the puppets’ movements and vocals, which are projected by another actor backstage, perfectly. “A lot of it is set to music, but consistency is paramount,” he said. 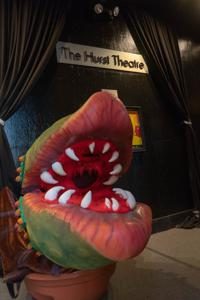 Anderson maneuvers four puppets throughout the show, the smallest being the size of his hand and the largest of which is the aforementioned man-eating plant that grows throughout the production.

“It takes a lot of strength and agility to manipulate, more so than I thought,” Anderson said. “It’s an absolute workout; I come out sweating pretty hard after some of the numbers.”

Along with the ice packs, inside Audrey II Anderson keeps a fan with a mister, a water bottle and snacks, in an effort to remain comfortable when his character isn’t engulfing his castmates.

The apprentice program, founded in 2013, houses and pays college juniors, seniors and young graduates “who are wanting to make this a career” to work with Theatre Aspen for the season.

And as anyone in the Roaring Fork Valley knows, finding homes for more than 20 people — and “as close to the theatre or bus stop as possible,” given the all-consuming rehearsal schedules — is no small feat.

The general manager of the nonprofit “spends a great deal of time” seeking accommodations, which also would not be possible without donor support, Reed said.

She noted that “several apprentices have gone on to work full-time on Broadway, as well as actors who started here.” For students like Anderson, the program is a once-in-a-lifetime learning opportunity.

“Getting to watch [the actors] do their work and see the level of professionalism, work ethic and commitment they have to making this play be as good as it can be is really exciting,” Anderson said.

A native of San Antonio, Texas, Anderson also said he’s “never seen a place like [Aspen]” before. He looks forward to checking out Aspen Mountain as soon as his production schedule slows down a little.

– Erica Robbie, Time Out Writer for the Aspen Daily News